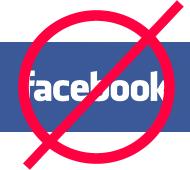 Digg pointed me to this gem today, Lack of Facebook Access Makes You Want to Quit? Grow up, Punks, penned by Ann All last week.

I love the generation gap. It makes for the best (and worst) kinds of “teamism”, reminding me of a bit George Carlin does about nationalism. The crux is why do people feel loyalty to an accident of birth?

I don’t agree or disagree with Carlin or those who take generational sides. It’s impossible to compare generational attitudes and experiences quantifiably, so why do we bother? Back to the post, this tidbit jumped off the page:

“A recent survey by IT services provider Telindus found that a whopping 39 percent of 18-to-24-year-olds would consider leaving their jobs if a Facebook ban was imposed, reports vnunet.com.”

Wow. That seems high, even for that demographic. Ann’s opinion can be gleaned from her post title, and as usual, the comments are highly amusing. I especially enjoyed Carol N’s comment, ” . . . People that waste time can do it with or without technologies.”

If you read here, you’ll know how I feel about Facebook bans. Obviously, from our work, you can tell we feel that social networks are helpful to getting work done, especially at a large company like Oracle.

Generation Y represents the first hyper-connected generation. They’ve been wired from the beginning. They also benefit or suffer, depending on perspective, from the blurring of life and work boundaries. Ever-present broadband and wi-fi plus increasingly affordable computing power have led to widespread telecommuting and have created a new niche for web working.

So to them, it does seem overbearing to ban Facebook, especially if they’re not working a structured 9-5 workday. I’d be interested to see a breakdown by type of work among the respondents.

Anyway, I doubt I would have blogged this at all. However, then Digg threw me this news item: Study Finds Instant Messaging Helps Productivity. The juxtaposition was profound to me. When I started using IM more than ten years ago, many companies blocked it because of the standard IT fears, security, potential for distraction and lost productivity.

So, here you have a relatively new phenomenon, social networking, being challenged as a timesink and unrelated to work, right next to an older phenomenon, previously challenged on the same grounds, now being hailed as a productivity enhancer.

I thought this was telling.

What do you think about all this, not the generational stuff, but the productivity of social networks?

Sound off in comments.